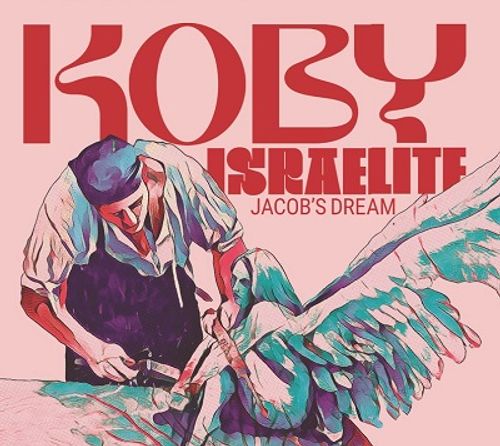 Here, on Jacob’s Dream, Koby Israelite demonstrates a gentler, more sophisticated side. “My grandmother bought me a piano when I was three and I started playing by ear,” says Koby. “When I was six I started to have piano lessons but I never liked it - I guess I had the wrong teacher for my rebellious personality! I got into music seriously when my parents finally gave up and bought me my first drum kit. I was very much then into rock music. Later on, in my late teens and early twenties, I got into jazz and classical music.” Koby shifted to London aged 22 and began drawing on the rhythms, sounds, vibrations and energies of this vast city so to create a music that reflected his hunger to create new sounds. “I was very happy to be exposed to so many genres of music really. I was never a purist, always liked to mix things together and create my own voice. My love affair with Eastern European music came by chance. I went to see Taraf de Haidouks in 2001 here in London. My mom is Romanian, I can speak the language, so I thought I’ll visit my roots (so to speak). They played an astonishing set and I got hooked for the accordion after seeing them – I don’t know why but I did. The next day I bought an accordion and, for a long time, it became my prime instrument. I recorded my music then, putting together everything I knew and thought I knew, and sent it to John Zorn (the maverick New York City musician who mixes thrash/jazz/surf/Rota and more to create soundtracks for non-existent films and much else) and this kicked off my career.” Koby released four albums through John Zorn's Tzadik Records label: Dance of the Idiots, Mood Swings, Orobas: Book of Angels Volume 4 and Is He Listening? Zorn said of Koby’s music, “he enjoys smashing genres together and grinding them into dust. Koby has absorbed an astounding array of musics, and blends them together here in dynamic and colorful musical world all his own. As complex and finely crafted as Naked City, Frank Zappa or Mr. Bungle at their best, the music on Dance Of The Idiots, Koby’s debut recording, is a passionate exploration of the Jewish experience. Cantorial Death Metal, Nino Rota Klezmer, Balkan Surf, Catskills free improvisation. You’ve never heard such sounds.” On these albums Koby worked with noted musicians from different genres, including Roberto de Brasov, the brilliant Romanian accordionist, making music that sounded like no one else. Busy both leading his own band and playing and producing other artists, Koby built an international reputation. Asphalt Tango released his album Blues From Elsewhere in 2013 and later issued Annique’s debut album Heads Up (which he co-wrote and produced). He then began composing for mighty Romanian brass band, Fanfare Ciocarlia – contributing outstanding tunes to their 2016 album Onwards To Mars! and 2021’s It Wasn’t Hard To Love You. “The challenge was huge for me as Fanfare are my heroes,” says Koby. “I wrote the songs for them using brass midi sounds and hoped that they would love what I do - as simple as that. Gladly they did and, I guess, asking me to write for a second album confirms that.” Keeping himself busy over lockdown, Koby worked on new compositions for what would become this album, Jacob’s Dream. Here is not the raging Balkan/metal mash-up he once was known for – well, there is a taste of such on one track – times have changed and so has Koby: Jacob’s Dream is an album full of spiritual questing and melodic beauty. “Recently, I had a lot of free time listening to music, especially to my beloved Chopin, and I guess I was inspired. Maybe I progressed or I’m just getting old. I’m not sure. What I am sure of is that Jacob’s Dream is my best work so far. I’m very proud of it.”