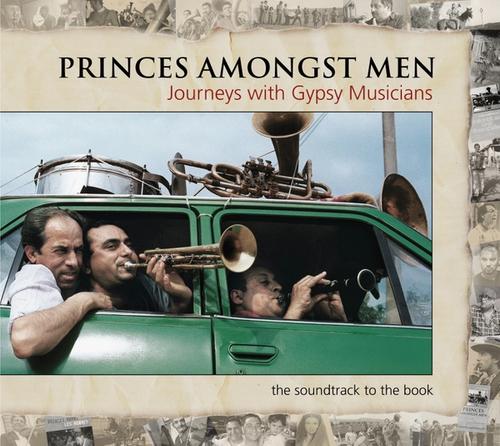 The soundtrack to Garth Cartwright's racy, plum-brandy-fuelled journey across the Balkans

Songlines: "This is the soundtrack to Garth Cartwright's racy, plum-brandy-fuelled journey across the Balkans in search of Gypsy musicians. The writing in the book "Princes Amongst Men – Journeys With Gypsy Musicians" was raw but vivedly evocative of the music and musicians encountered... Many of those are featured here, with compelling tracks from larger-than-life characters such as Esma Redzepova, Saban Bajramovic, Boban Markovic and celebrated bands like Fanfare Ciocarlia and Taraf de Haidouks. These are, of course, the usual suspects of Balkan Gypsy compilations, but there are other lesser-known treasures here like Serbia's Kal, Romania's Fulgerica and Bulgaria's Jony Iliev, plus some older Romanian lautari tracks by singer Romica Puceanu and cimbalom maestro Toni Iordache... The 18 tracks have clearly been chosen with hands-on expercience of the territory..." Sudahan put a clarinet to his lips at the wedding of Elvis Huna in Skopje and blew a ferocious wail, summoning the spirit of Shutka (city of Gypsies). Dzansever's a phantom, singing only for Turkish and Gypsy weddings, her voice conveying deep Balkan blues. Sofi Marinova's charming, a devastating singer. Boban rules Serbia's Guca brass band festival. There he sent thousands of youths into ecstasy with his eerie, charged notes. Ederlezi - the holy day for Balkan Gypsies - in Kyustendil mahala, south west Bulgaria. A night never to forget. Jony & Boril Iliev's band played and the ghetto rose in a wave of joy. Esma enters a room - any room - and is acknowledged as the Queen. Saban, choking on a cigarette, remains the Lizard King. Ekrem and Naat: stoic trumpet masters. Ferus leers. Fulgerica frowns. Kal's Dragan Ristic's a smooth operator. In Zece Prajini, Fanfare Ciocarlia's "invisible" village, geese and pigs clutter up the main road and brass echoes across the valley. Taraf de Haidouks translates as Band of Outlaws. Very apt. Eight wild, relentless months . . . from Spring to Winter . . . a Balkan exodus . . . I got the bear and the bear got me. Some dream of running away to join the circus. Mine was to ride with the Gypsies. This is how the journey sounded.